Jacksonville Gullah Geechee Nation CDC is a non-profit, 501c3 organization sponsoring an educational CULTURAL HERITAGE FALL FESTIVAL in Jacksonville, Florida.  The project, OCTOBER GULLAH FEST, is given free admission to the public.  This 10th ANNUAL OCTOBER GULLAH FEST is designed to educate patrons of all ages on the historical footprint of Jacksonville’s African American influences.  Through Culture, Art, Dance, Storytelling, Language, Song, and Food we will host this year’s festival.  Performances celebrated throughout the day are created by local artists, schools, choirs, poets and dancers telling their story of these influences.  Each year, for many participants, this CULTURAL HERITAGE Event has become one of their most memorable life changing experiences. 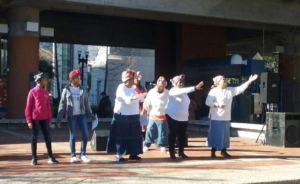 WE ARE SEEKING SPONSORS, DONORS, ENTERTAINERS AND VENDORS

PRAISE IN THE PARK 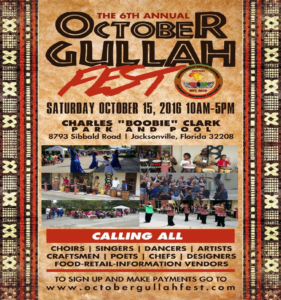 Each year community groups from all areas of the city and beyond come to perform their renditions of Gullah Geechee Cultural Heritage through the spoken word, Dance and song.  Our groups and solo acts are top tier PERFORMERS. Groups such as Mega Mind Productions, Hot Cofey Entertainment, Jacksonville Gullah Geechee Shouters, and the famous Macintosh GULLAH GEECHEE SHOUTERS are a few performing acts of the 2017 OCTOBER GULLAH FEST. 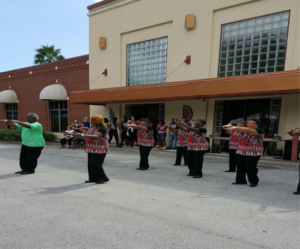 Opening ceremonies include a salute and remembrance of ancestors and the struggle to freedoms we now so richly enjoy..  The Mistress of Ceremony Agnolia B. Gay does reenactments of the days of old bringing the participants into remembrance of our need to reflect.  Throughout the day performances tell the story through spoken word, dance and song bringing the audience into enlightenment of historical information; that change mindsets and establish new venues of knowledge to our youth. 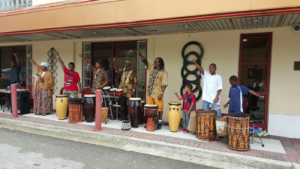 Jacksonville Gullah Geechee Nation CDC, a 501c3 not-for-profit member-driven organization comprised of African-American descendants of diverse cultures and native tongues domiciled in the State of Florida. We have established in order to bring inherited cultural awareness and to improve the historical education, development and preservation efforts of all who want to know more about the Gullah/Geechee.

As a public Community Development Corp, we are devoted to educating humanity about the rich cultural legacy we brought to this continent and AMERICA, have contributed, and continuously contribute to society through music, innovation, technology, environmental sustainability, economics, research, and preservation thereof.

Designated by Congress in 2006, the Gullah/Geechee Cultural Heritage Corridor extends from Wilmington, N.C. in the north to Jacksonville, Florida (St. Augustine) in the south. It is comprised of approximately 3,200,000 descendants living within 27- 28 counties, sum of 80 barrier islands, 30 Miles inland from the Atlantic Ocean.  These four STATES are said to be the home of GULLAH/GEECHEE. People embodied to developmental language and cultures brought into forms of isolationism by SLAVE ships embarking upon the the making of a conquered New World.

Florida is home to one of America’s most unique living cultures in the world.  As a tradition first shaped by free and freed Africans/Native Americans Florida was a Mecca of blended lives for Freeman.  Spanish, Indian, Maroons, Africans and French shaped the face of early settlements in and around what we know today as Jacksonville, Florida

ORIGIN
The origin of the Gullah language is as unique as the cadence and rhythm of its sound. It is popular belief that the name Gullah is a distortion of the name Angola, a region that supplied some 40% of the enslaved people brought to and sold at the Charleston Slave market. Even though this popular belief has its merit, today’s research continues to give percentages of the Bantu languages of South and Central Africa to have had great influence on all forms of GULLAH Geechee speech patterns.  During the TransAtlantic SLAVE Trade French, Spanish, old English and Portuguese Creole speakers came from many countries in Africa and were marked for their skill sets into the holding area for months until ships needing that skill landed. They came from areas of needed expertise to accomplish labor and exportation goals for building the conquered New World.

The Gullah/Geechee are a distinctive group of African Americans whose origins lie along the coasts of the Carolinas, Georgia and Florida, as well as the adjacent Sea Islands. Nearly 3.2 million Gullah/Geechee residents live between Wilmington, North Carolina and Jacksonville, Florida (St. Augustine) today.  CELEBRATION of the accomplishments of generations of enslaved Americans and Native Americans are vastly overlooked historically. Thus, giving rise to the cultural heritage aspect of educational experiences enjoyed by the public in museums, festivals, performances and systemic management plans.

Each year OCTOBER GULLAH FEST puts a call out for vendors, choirs, dancers, poets, bands, vocalists, rappers, steppers, community organizations and businesses to participate.   The responses are great. OUR vendors, entertainers, and guest enjoy the day of festivities and look forward to the following year. The increase in participation is largely due to personal testimonials. 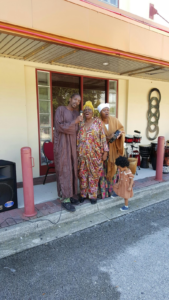 Lady Georgia sings with Thomas and Agnolia B. Gay

We are training our youth triathlon team for rides in October of 2016 to culminate the Camp GULLAH Geechee.  This project has been implemented to bring awareness to local non-motorized trails in our effort to promote the great outdoors.  By creating healthier lifestyle choices in the URBAN Core, the Go Green Eat Healthy Gardens, BLUE HEN and Camp Gullah Geechee Cycling component projects of Jacksonville Gullah Geechee Nation CDC have been presented to the community with the help of grants, volunteers and donations. 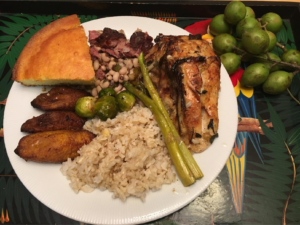 OCTOBERGULLAHFEST is an annual event free to the public.  This event is made possible through participation of citizens interested in spreading the celebration to all interested partners in the city.  Please spread the word: OCTOBER GULLAH FEST 2017 SATURDAY   and Sunday                               OCTOBER 21-22, 2016 10am-5pm 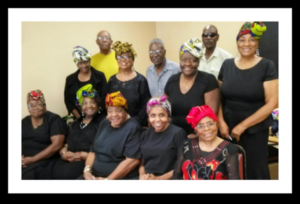 “Gullah/Geechee is a blend of African and European culture and traditions developed by former slaves living in isolation in the Sea Islands of the Carolinas, Georgia, and Florida.  I was proud to get legislation passed creating a Commission to preserve and protect the Gullah/Geechee culture, which is increasingly endangered and deserving of protection. I am extremely pleased that the Congress has agreed to a five year extension of the Commission,” James Clyburn Democrat South Carolina  stated

#Things to do in Jacksonville, Florida #OCTOBER GULLAH FEST

OCTOBERGULLAHFEST is an annual FESTIVAL with free admission to the public.